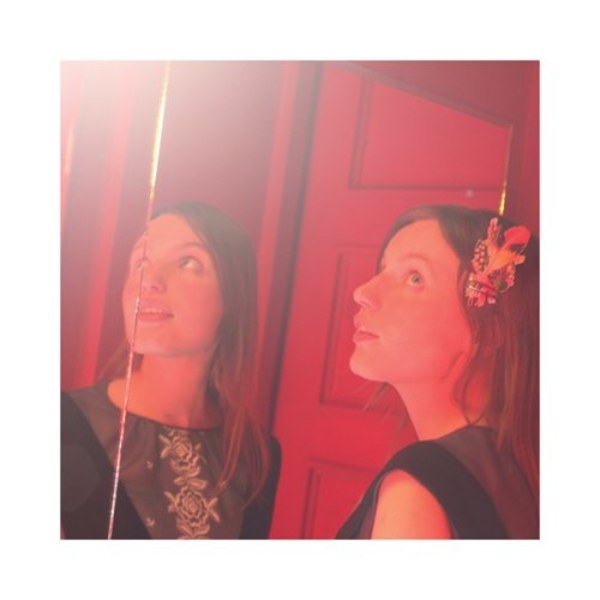 In the years since her debut album Kuutarha, Laura became a mother, moved to the Finnish countryside and took valuable time to carve out a space for her enchanted art in the new found tranquility of her remote surroundings. Conceived in tight attics & vacant dens on off hours when her young son Nuutti was fast asleep, this is an intimately crafted 9 song collection that unfolds like dreamlike musical ribbons for the senses and delivers the listener to a place of unhurried contentedness.

length Kuutarha on Chicago’s Locust Music in 2005, Lau Nau has enjoyed considerable recognition for her intimate & playful blend of ethnic tinged folk songs with curious & intuitive sounds conjured from famil- iar and exotic sound sources. Kuutarha made many year end best of lists and achieved recognition as an “important record” (Dusted), a “tremendously powerful statement” (Brainwashed) that “begs to become many a listener’s point of fixation, source of meditation and object of adoration” (lost at sea). In their 8.0 review, Pitchfork praised lau nau’s unique combination of edginess and warmth on Kuutarha: “(Lau Nau) manages to take a million-and-one risks while keeping things subtle, understated, aesthetically intriguing and emotionally resonant”. Stop Smiling magazine praised the album for its ”natural beauty, isolation and mystery” and the Chicago Reader called the album “diverse and exotic, with a dying-campfire vibe” echo- ing a generally held sentiment among critics and fans alike that with Kuutarha, Lau Nau had tapped into something uniquely foreign yet emotionally rich, vital and rewarding.

In May 2008, Lau Nau’s long awaited follow up, Nukkuu, sees release on Locust. A part of a continuum of sorts, Nukkuu, travels the outer pathways of sound similar to those heard on Kuutarha yet Nukkuu is unavoidably enriched by Lau Nau’s own life changes in the years between the two records. Naukkarinen became a mother and moved her family to Finland’s remote countryside and with new distance and new devotion in life, her musical world underwent its own subtle shifts. The beauty, mystery and daring of her debut are traits that run through the main veins of Nukkuu but there is an almost unavoidable sense of contentedness amidst the tide of musical abstraction that brings the listener one step closer to her interior sound world. The release of Nukkuu will be supported by extensive performing in Europe in the Spring and Summer 2008 and a North American tour this Fall.

As a live performer, Lau Nau has enjoyed opportunities to perform in a wide array of venues from small informal spots like Massachusetts’s Montague Bookmill & Westers Gallery on Kemiö Island, Finland to larger spaces like Stockholm’s Kulturhuset, New York’s Anthology Film Archives, the Contemporary Art Centers in Glasgow, Brussels & Castelló and the Avanto festival in Helsinki. In recent years, her rare and special live shows have earned her a special place among a legion of fans. This was further cemented when a Lau Nau performance during her 2005 North American tour was counted among The Wire magazine’s “60 Concerts that shook the world” in its February, 2007 issue.

Naukkarinen has been an active presence in the Finnish underground for the last decade playing in groups like Kiila, Hertta Lussu Ässä, Päivänsäde, Avarus and the Anaksimandros, organizing con- certs, publishing a magazine and running a handful of small labels starting with POK and , more recently, the Peippo label.

Her musical activities spread far beyond her recorded work and permeate almost every aspect of her pri- vate and public life from her participation in multimedia events to her workshops teaching music to young children throughout Europe.

Over the past five years, Lau Nau has participated in several spontaneously improvised live film scores to classic avant-garde films including Vertov’s Man With a Movie Camera, Christensen’s Haxan and Dreyer’s La Passion de Joan d’Arc for the Turku Film Archive, Anthology Film Archives (New York) and Bio Rex (Helsinki) and Tromso Stumfilmdager (Norway). In 2007, the improvised score for Haxan was used as the accompanying soundtrack to the Swedish Film Institute’s DVD release of this legendary film.

Her music was used in a prestigious Magnum Photo essay “No Whisper, No Sigh” alongside fellow Finnish musicians Islaja, Kuupuu and avant-garde legend John Cage in 2006. In 2008/2009, her music will appear as the backdrop to an exhibition by Japanese photographer Moriyama Daido.

Lau Nau lives with her partner, Antti Tolvi, and their young son Nuutti in the remote countryside on Kemiö island.