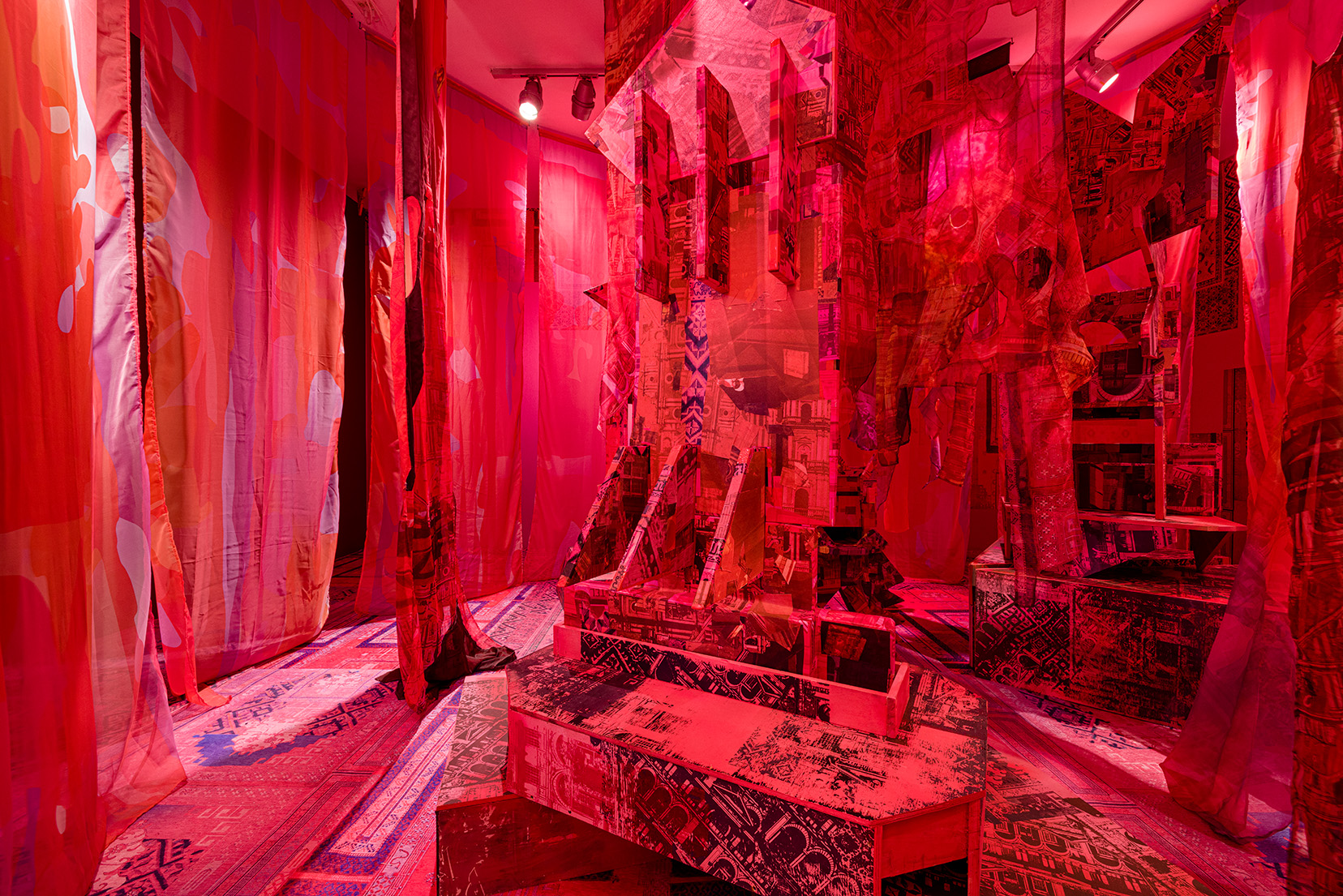 Roots Burrow Through Stones and Hard Facts is an immersive installation environment in Smack Mellon’s back gallery by Sara Jimenez. The sound component of the installation is made in collaboration with musician/composer Lau Nau. This project emerges from the artist’s research into Binondo, Manilla’s current Chinatown neighborhood in the artist’s ancestral country of the Philippines. Binondo was the first recorded instance of a Chinatown, established in 1594 by colonial Spanish settlers who aimed to restructure the cities through ethnic separations. Divided by a physical wall from the Spanish settlement Intramuros (literally “within the walls”), Binondo stands as a relic of ethnic control and labor efficiency during the Western transition to capitalism—one that has also evolved through the centuries.

The artist has overlaid imagery of textiles from Chinese, Spanish, and Filipino origins, along with zoomed-in, digitized fragments from photographs of the architecture in Binondo and Intramuros, onto sculptures, suspended fabric, wallpaper, and flooring that cover the entire space of the gallery. By combining these visual elements from this particular historical legacy, Jimenez endeavors to rearrange the colonial arrangement. She grapples with the questions: What emerges as resilient and fugitive despite attempts to erase and repress? What cannot be controlled, tamed, erased? Through the translucent fabrics, Jimenez plays with the parameters of porousness and containment between what is designated as inside and what is outside. The installation itself reflects on ways that memories, ancestral knowledge, and secrets become embedded in architectural spaces while also being contained within the body.

The environment is made of various red and pink tones, simultaneously referencing Western cultural associations with femininity, metaphors of blood and flesh, as well as a reaction to “Baker-Miller Pink”—a pseudo-scientific strategy used in the 1970’s to calm inmates by painting the interiors of prisons. Here, the saturated pinks are intended to excite rather than soothe. The gallery is filled with a sound environment designed by the artist’s longtime collaborator Lau Nau, composed from field recordings of volcanic activity and low-frequency audio recorded outdoors. The center of the installation contains a montage of barely legible whispered voices, edited together by writer Jason Schwartz and Lau Nau, sourced from American colonial texts and archival documents describing Binondo.

Together, the installation creates a mediation on interiority, porousness, and resilience, asking in what state cultures can continue or be preserved after generations of suppression by colonial influence and rule. By collaging together the historical remnants of this influence, both visually and sonically, the artist asks viewers to reflect on the process of reclaiming colonized histories. Here, the voices of the colonizers can no longer be eradicated, but can be rearranged to reveal the voices and spirit of those written out of history. The title of the exhibition is an excerpt of the poem Ode to Masturbation by the Vietnamese-American writer Ocean Vuong, wherein the author expounds the relationship between othered bodies and pleasure. The “roots that burrow through stones & hard facts” are the ones that carry the histories, chopped up and diverted by Western colonial narratives, but persist nonetheless.

Sara Jimenez is a Filipinx-Canadian interdisciplinary artist based in Brooklyn, New York. Jimenez received her BA from the University of Toronto (2008) and her MFA from Parsons the New School for Design (2013). Jimenez has exhibited at the Pinto Art Museum (Philippines), El Museo del Barrio, Rush Arts Gallery, BRIC Gallery, BronxArtSpace, FiveMyles Gallery, The Brooklyn Museum, The Bronx Museum, and Smack Mellon, among others. She has performed at numerous venues including The Dedalus Foundation, The Noguchi Museum, Jack, The Glasshouse, and Dixon Place. She has been an artist in residence at various organizations, including Brooklyn Art Space (2014), Wave Hill’s Winter Workspace (2015), a full artist fellowship to The Vermont Studio Center (2016), the Bronx Museum’s AIM program (2016), Yaddo (2018), BRICworkspace (2018), Art Omi (2019), Project for Empty Space (2019), LMCC’s Workspace (2019-2020) and Bemis (upcoming). She is the recipient of the Cecily Brown Fellowship and has been listed as Smack Mellon’s “Hot Picks” in both 2018 and 2019. Her work was recently acquired as part of the permanent collection of the Ford Foundation Center for Social Justice. She has received grants from NYFA for the Canadian Women’s Artist Award, as well as from Canada Council for the Arts. Jimenez teaches at Parsons the New School for Design, New York University, BMCC, and mentors graduate students at the Vermont College of Fine Art, and the School of Visual Arts.

Jason Schwartz is a writer and political activist living in Brooklyn. He works as a campaign and communications strategist in the struggle for economic, racial, and environmental justice and the rights of working people. His writing has appeared in numerous literary journals and magazines. Jason was a founding editor of New Herring Press, which put the work of visual artists in conversation with contemporary writers, and he was a founder and curator of the performance/literary/film/music series Diamond Mouth Surprise.