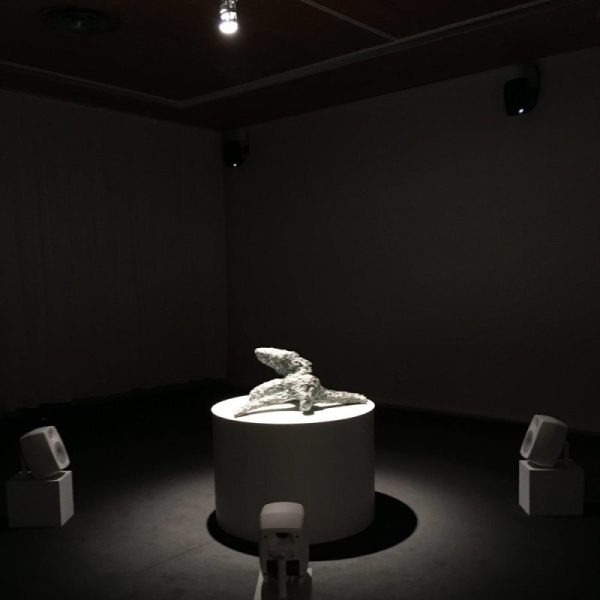 In the 1960s Carl-Gustaf Lilius began creating a series of sculptures entitled Woman with Bird’s Wings, which eventually came to comprise more than a dozen works. The 1966 bronze sculpture acquired for the Maire Gullichsen Art Foundation collection is one of the first in the series. In the exhibition, Lilius’s bronze is accompanied by a new soundscape by Lau Nau and Antti Tolvi that interrogates the sculpture about freedom and wildness.

The exhibition series Posing New Questions to the MG Collection explores new ways to view familiar works in the Maire Gullichsen Art Foundation collection. What happens when contemporary artists enter into dialogue with a sculpture representing the legacy of modernism in art?

Carl-Gustaf Lilius (1928–1998) was a versatile artist and dissenter in post-war Finnish culture. He was a painter, sculptor, printmaker, draughtsman, author, essayist and philosopher. The common denominator in his broad artistic and literary output is humanity arising from his philosophy of life. Lilius’s thoughts about the importance of human interaction and love remain just as urgent as they were in their day.

Lau Nau (Laura Naukkarinen) and Antti Tolvi are versatile artists whose principal mediums are sound and contemporary music. They live on Kemiönsaari island.

Laura Naukkarinen (b. 1980) is a composer, performer and producer. She creates cinematic audioscapes that sound with echoes from experimental contemporary classical and traditional folk music. Under the pseudonym Lau Nau she composes and produces music for films, stage, sound installations and for her own ensemble. Her broad spectrum of tools ranges from traditional instruments and voice to analog synthesizers and field recordings.

Antti Tolvi (b. 1977) is a sound artist, performer and composer and a leading name in Finnish underground music. Tolvi’s output includes 14 solo records, sound installations as well as compositions and scripts for dance and theatre productions. He also works as instructor in Chinese qigong meditation. In his work, Tolvi explores the extreme reaches of sound, such as silence and extended static sounds, which occasionally alternate with rich, colourful masses of sound.